You ever see the movie MASH by director Robert Altman? In this classic and hilarious look at a frontline medical unit in the Korean war, surgeons and a dentist fight in the mud and blood to patch up injured soldiers. Yes, a dentist is right there, taking care of regular dental needs and stepping into the operating theatre to perform reconstructive oral surgery.

In the here and now, physicians and dentists are considered distinct but complementary professionals whose services rarely—if ever—overlap. In some instances, the discussion into the healthcare qualifications of physicians vs. doctors devolves into battle. A recent post on The Oral Health Group  sheds light on how professionals and patients alike view the professions. For a revealing peek into the minds of people, read the comments. For example:

“A physician has a comprehensive understanding of pathophysiology. A dentist will consider the pathology that is limited to the scope of their education and training. In emergent situations, dental doctors should be transparent about their license. For all you know this person could have had a severe neurological issue that a trained medical doctor would recognize. If you want the title of “doctor” for the sake of feeling like you are a medically trained physician, then you should have gone to med school.”

And the reply: “Absolutely not true. I’m in dental school and our anatomy, pathology, pathophysiology curriculum are exactly the same as of the medical students. We also have internal medicine, psychiatry, ophthalmology, otorhinolaryngology, psychiatry and a few other general medical specialties (not for as long as medics but we still learn the essentials of each) all of that on top of our own specialties. We spend more time in university each day, we have more subjects per unit time, we study for the same amount of time (6 years) to obtain a DMD degree as they do for an MD degree so we are both equally prepared for emergency medicine as far as an off hospital occasion is concerned.”

The whole comment thread gives us a glimpse into the attitudes and misconceptions held about both physicians and dentists. But what is the reality?

The reality is that good dental health is essential to overall general health and well-being, which makes access to affordable dental credit a health imperative. The roles that physicians and dentists play in this picture are unclear to most people. What is the reality? And how does dental credit fit into the picture?

The Nation’s Doctors Speak Up.

Any productive health program must include both physicians and dentists. For decades, government and professional agencies have acknowledged this.  In 2000, The U.S. Surgeon General presented a “Report on Oral Health.” It drew attention to what was referred to as a “silent epidemic” of oral disease and pointed out the importance of oral health on overall well-being. To quote directly from the abstract:

The release this year of “Oral Health in America: A Report of the Surgeon General”—the first such report on this topic in U.S. history—gives national visibility to the scope and breadth of oral health and disease in America. The report emphasizes oral health's inextricable link to general health and well-being. Although the country has seen major improvements in oral health, some population groups have yet to benefit from these improvements. To address health disparities and improve quality of life for all Americans, the surgeon general's report calls for the development of a National Oral Health Plan.

In July, the Surgeon General announced that the office was planning to update the 18-year-old report. In the meantime, a plethora of publications for academic, professional and governmental agencies.

Where are we now?

In 2017, a review of the original report showed that advances have been made. Oral health on the whole had improved, but that disparities still existed. Those disparities seemed to result mostly due to income. To quote The American Journal of Public Health: “…poor children were found to suffer twice as many dental caries as their more affluent peers, and the disease was more likely to be untreated. The disparities were related to determinants of health, such as income, age, gender, race/ethnicity, access to care, and medical status.” In other words, lack of affordable dental financing was part of the problem. People with access to dental loans or credit for dental treatment were more likely to receive better dental care and, it follows, better health care in general.

There is a place physicians, dentists and lack of affordable dental financing for patients collide: emergency rooms. According to a report from Dr. Dianne L. Sefo, RDH, BA, “Oral care problems are placing a considerable strain on the health care system due to the increase of people looking for dental treatment in emergency rooms instead of dental offices.” Dr. Sefo refers to statistics provided by The ADA Health Policy Resources Center that estimates the number of emergency room visits for oral care problems has increased from 1.1 million to 2.1 million—almost doubling between 2000 and 2010. Of course, every patient using emergency wards for tooth aches and abscesses in the gums distracts doctors from people needing critical and urgent care. Further to this, treating dental issues in emergency wards can cost almost 10 times more than having the problem treated by a dentist.

The ADA points out that few hospitals are equipped to provide comprehensive dental care and, for the most part, simply prescribe medication and refer patients to a dentist. But, as Hamlet said, “Therein lies the rub.” Patients have poor dental health due to lack of financial options. Yes, education plays a role, but to far less of a degree than limited financial resources. A patient can take the referral, but they haven’t got the money to make the appointment. The ADA addresses this with their Action For Dental Health Initiatives.

Physicians and Dentists Working Together.

The ADA’s Action For Dental Health Initiatives isn’t just another policy paper. It presents viable plans for people who can’t afford regular dental treatment. A good example of this is the creation of Community Dental Health Coordinators. These organizations understand the issues that contribute to poor dental health. To quote the ADA’s report: “Trouble finding a dentist often has more to do with other community factors such as poverty, geography, language and cultural barriers, availability of childcare or transportation, rather than lack of dentists able to treat patients.” With that in mind, the CDHC’s work to overcome these obstacles for people short on resources.

While the idea of CDHCs is admirable, the reality is a little shaky. For example, CDHCs are not yet available in all states. Many states are still training CDHCs providers. Even when the program is available everywhere, there will still be families and people in that gray area where government and charitable organization help is limited. The working poor, as they are called, will still find themselves on their own. These are the people who simply need a realistic financial option for dental treatment.

Physicians have known for decades that lack of dental care has resulted in more emergency room visits and deterioration in general physical health. They have made the connection between illness such as heart disease and oral care. Yes, physicians have extensive training that dentists don’t receive. On the other hand, they do not have the training and experience in dealing with gums, teeth, jaws and the palate that dentists earn. By working together and acknowledging that they are partners in health, their patients will live longer, better lives.

One major weapon in the battle against disease…

…is providing patients with affordable dental financing for patients. Compassionate Finance has been designed to offer people options that they can afford. Perhaps more medical doctors need to consider the services we provide and suggest our flexible financing options for patients needing better oral care. After all, good dental health makes their job easier.

Fill out the form below to get timely updates from our blog delivered to your email inbox. 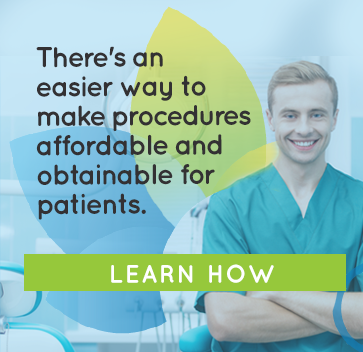